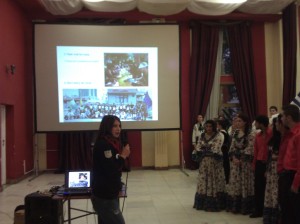 The teenagers from Gipsy Eye celebrate diversity together with their friends from the other Romanian etnic Associations. Along with the Romanian, the Italians, Hungarians, Greeks, Lipovans, Russians, Ukrainians and Polish, enjoyed of a special day, a day where the music, dance and costumes were the center of the attention at Confluence Festival.

The course of the traditional folk costumes parade went from Big Stefan Boulevard to Union Square and then to The Cultural House of Students in Iasi. The parade was very enjoyable by the teenagers from Gipsy Eye, the ones that combined traditional with modern and so the caught the eye of the passer by’s.

“Today in Bucharest and Iasi, roma teenagers are confirming once again that they are proud to be called roma. We are happy to share our joy with the teenagers from the other associations. It passed 3 years since we are participating at Confluence Festival and we  are glad that everyone appreciates ” just like Dragos said, one of our roma volunteer.

After the parade  the  roma teenagers  prepared for the ones that wanted to cross the door of the Cultural House of Students  a stand with information’s about roma’s culture and history and with volunteering offers. Of course there

were like always the living books, like Ionut:  young roma teenager and a dancer and Snowdrop ( Ghiocel), another gipsy from the Stall. The festivity ended with a big show made by Gipsy Eye on the big scene “Gaudeamus” where Snowdrop (Ghiocel), Macinoi, Ionut, Mela , Alexandra and Odet shared through dance the story o f the roma people.